The greatest show in World Football is almost upon us…The 2018 FIFA World Cup Russia. Stay up to date with all the action and news on the FIFA TV YouTube Channel

The FIFA World Cup is an international association football competition established in 1930. It is contested by the men’s national teams of the members of Fédération Internationale de Football Association (FIFA), the sport’s global governing body. The tournament has taken place every 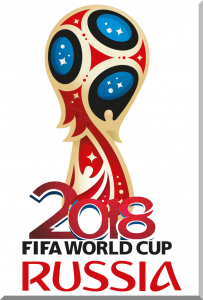 The most celebrated players in the world of football will be joined in Russia by some of the biggest stars of today’s international music scene. As part of another exciting collaboration between FIFA and Sony Music, Will Smith, Nicky Jam and Era Istrefi will perform ‘Live It Up’, the Official Song of the 2018 FIFA World Cup Russia™ produced by DJ and songwriter Diplo.

Ahead of the final on 15 July, the music stars will warm up the 80,000 spectators at Moscow’s Luzhniki Stadium and around one billion people watching on TV just a few minutes before the two finalists come out on to the pitch. Until then, fans will have enough time to learn the lyrics as “Live It Up” will be released on multiple streaming platforms this Friday, 25 May. The FIFA World Cup Official Music Video will be available as of 7 June.

“It’s an honour to be asked to perform at the 2018 FIFA World Cup. This global event brings people from all over the world together to cheer, laugh and experience magic. Collaborating with Nicky, Diplo and Era on this track represents harmony, eclectic flavours and genres coming together. At the end of the day, we just want to see the world dance”, said world-renowned Grammy Award-winning actor, songwriter and artist Will Smith.

“FIFA and Sony Music have enjoyed a successful cooperation on the Official Music Programme for years now. The synergy between football and music is striking, both stirring up fans’ emotions across the globe. This song – with a world -class line-up worthy of the greatest show on Earth – embodies the excitement, the celebration and the unity that people all over the world will share during the 2018 FIFA World Cup,” says Philippe Le Floc’h, FIFA Chief Commercial Officer.

“Sony Music has had a longstanding relationship with FIFA. When discussing the official music for the 2018 FIFA World Cup, the objective that both organisations agreed on was a great song supported by an all-star line-up,” added Afo Verde, Chairman & CEO of Sony Music Latin Iberia. “We are very excited that Will Smith, Nicky Jam, Diplo and Era Istrefi are part of the song and working hand in hand with FIFA and our artist community in providing the soundtrack for the biggest event in the world.